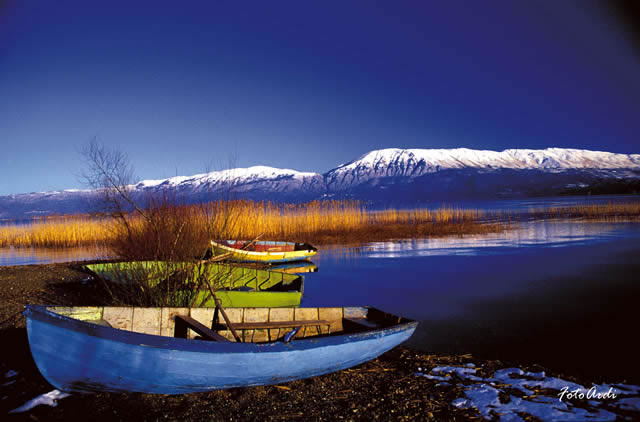 Albania has many different types of lakes. Its major lakes are Shkodra, Ohri, Lura and Prespa.

Shkodër Lake is the biggest lake in Albania and also in Balkan Peninsula. It has an area of 368 km.sq. Shkodra lake in the Albanian territory is characterized by the diversity of shores and the land .The eastern shores are low with marshes while the southern shores are high and with rockies. The water of lake is rich with different kind of fish species , such as elk , etc. There are two tourist spots , Shiroka and Zogaj. They have fish restaurants and small hotels in Shiroka .

Ohri Lake is the second lake in terms of area ( total 362 sq.km, one third belongs to the country) and the deepest both in Albania and Balkan Peninsula ( max 287 m deepth). The water of the lake is very clear . Rich in rare species of the fish , worth mentioning is the fish KORAN , hardly to be found in other lakes of the world over. Along the shores of the lake there are several tourist spots. The city of Pogradec is a resort center, preferred because of its beautiful beach and the fresh summer climate. The other tourist spots are Lini village, Pojska, and Driloni. The visitor can find here the basic facilities.

Lura Lakes The glacial complex of Lura lakes are one of the most beautiful pearls of Albanian nature. The glacial lakes of Lura have a general surface of 100 ha. They are located in the northeastern part of the countru in the district of Dibra. In winter these lakes freeze , taking the view of natural skiing lanes. The lake of Flowers is really astonishing with the big white water lilies in summer, leaving the impression of a big garden created by the hand of a mastermind. Lura is a National park.

Prespa Lake is the highest tectonic lake in Albania and also in Balkan peninsula, 853 m above sea level. It has an area of 285 sq. km , 39 km. Sq. belongs to Albania. The Prespa lake has a panoramic view , full with small bays and high shores. It is rich in fish , among which the delicious small herrings. There are several villages on the shore of the lake. In front of Liqenas village there is a small island of Maligradi. There during the the fourteenth century the church of St Mary had been constructed within a cave. Some byzantine painting are found there. All area of Prespa between Albania, Greece and FYROM is proclamated as Natural Park.

» Your world is a living expression of how you are using and have used your mind.
» Your problem is to bridge the gap which exists between where you are now and the goal you intend to reach.
» You`ll find boredom where there is the absence of a good idea.
» You can measure opportunity with the same yardstick that measures the risk involved. They go together.